18+ event.
--
Australian post-apocalyptic acid punk disco scuzzheads TFS are coming to the UK and Europe for the first time since 2019. For the last two years they've been holed up in a bush bunker pursuing their sonic experiments which have produced 2021's Deep States album, and feature film Goody Goody Gumdrops. Tropical Fuck Storm members Gareth Liddiard, Fiona Kitschin Erica Dunn and Lauren Hammel will be bringing their wild, destructive and unstoppable chaos to the Northern Hemisphere stages performing songs from A Laughing Death In Meatspace (2018), Braindrops (2019) and Deep States (2021).

"The darkly hallucinogenic world of Melbourne weirdos Tropical Fuck Storm is a borderless realm, its edges blurry like a fever dream. ... Any time you think you've sussed their murkily psychedelic approach, the quartet take another thrilling, freewheeling detour." Kerrang

"In Tropical Fuck Storm’s determination to engage as fully as possible with the reality of human existence, in all its ugliness and contradictions, they are tapping into its truths." The Quietus

"Beyond such vivid, often thrilling caricatures, however, the acrid smoulder of The Donkey, the mysterious haunt of Legal Ghost and the nuanced pop of New Romeo Agent prove that Tropical Fuck Storm have yet to succumb to glib nihilism, and that tenderness and poetry are still within their grasp" Mojo

"What makes Tropical Fuck Storm as vital as they are unsettling is how well their songs, which often seem chaotic, fractured, and as brutal as the subjects they consider, speak to the currents of our contemporary worry. They’re making a strange sort of musical magic, to be sure. But they’re also demanding that we confront a world where change isn’t necessarily gonna come." New City Music

"Everyone I could see, myself included, had a smile on their face I’m not even sure was voluntary. The looks on the faces of the crowd after the band had left the stage were ones of awe—multiple mouths were left agape and eyes were wide open, almost in disbelief. It was a remarkable performance. One that anyone in the audience would attest to it being phenomenal. Throughout the entirety of the set, down to how the band dealt with their technical issues, it felt like witnessing the best guitar band in the world" Spectrum Culture @ Elsewhere, Brooklyn

“Heavier, wilder, and more faithful to their evocative ‘fuck storm’ promise than ever before, the third full-length from the Antipodeans is an uncompromising prospect: merciless barrages of ear-splitting shreds; crunching, skin-crawling rhythms that bore into the skull’s fragile surfaces; to top it all off, a lyrical parade of grimly ghoulish imagery, tackling, without censure, the psychological fall-out of the pandemic.” DIY Magazine 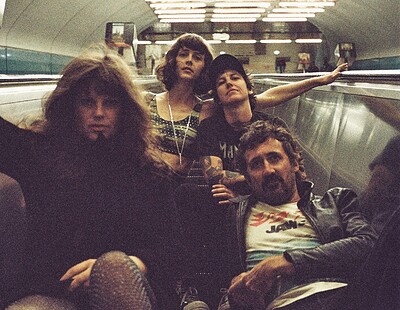