Spaceslug // Forming the Void // More To Be Announced

Tuesday 12th May
The Lanes, Bristol

Following unprecedented demand... Welcome from the depths of space another masterpiece of doom; in the form of SPACESLUG.

"I find myself once again immersed and transported in a way that most of the onslaught of up-and-coming stoner doom bands could only dream of pulling off." - Metal Storm

Alongside are Doom Charts toppers, Louisiana’s FORMING THE VOID; who are one of stoner metal’s best-kept secrets.

More bands to be announced.

Founded in 2015 by guitarist Bartosz Janik and drummer Kamil Ziółkowski and then completed by bassist Jan Rutka this Kozmic Doom trio started their biggest musical journey through space, time and multiuniverses.

They succed in 2016 with their debut album "Lemanis" that granted the band a great entry to the community of Stoner/Doom/Psych music.

Driven by the success of their debut LP they took their approach and music to a new level and recorded second album "Time Travel Dilemma" which was released one year after debut.

Second journey starts where the first one leaves the listener and takes him to the whole new universum among the stars and supermassive black holes.

After that band released EP "Mountains & Reminiscence" which was missing link between their cosmic voyages.
Driven by the success of their debut LP they took their approach and music to a new level and recorded the second album "Time Travel Dilemma" which was released one year after debut.

-For all who loves cosmos and heavy riffs-

Imagine you are a celestial traveller powering through the blinding lights at the end of the tunnel into the next world, crossing barriers of space and time without fear. Interdimensional shamanic sludge rockers Forming the Void are here to conjure an ecstatic trip of atmospheric wonder and immerse you in waves of psychedelia.

Topping the August Doom Charts, their fourth effort 'Rift' evokes the progressive and heavy tendencies of Mastodon and Torche, the psychedelic and soaring melodies of Pink Floyd, and rolling approach of Soundgarden. Swamp mud stuck to their feet as they trudge from South Central Louisiana, Forming the Void aren't afraid to slow things to a crawl.

Their otherworldly sound has earned them spots on large festivals such as Psycho Las Vegas, Denver's Electric Funeral Fest, EndHipEndIt, Stoner Daze and Stoner Jam at SXSW, and Descendants of Crom. Transcend through space and time with Forming the Void as they traverse the cosmic murk.

"It’s clear the fans and critics hear something special, and seeing them live in Vegas plus meeting and hanging out with the dudes it’s clear they are on the right path.” - Doom Charts

"Displaying an elaborate musical tapestry that swirls from devastatingly heavy riffs [...] Rift is very much an organic and elaborate offering from a band whose potential is fast becoming realized." - Metal Hammer

“Forming The Void are set to crush all-comers with this follow up to their much lauded third album Relic.” - Classic Rock Magazine 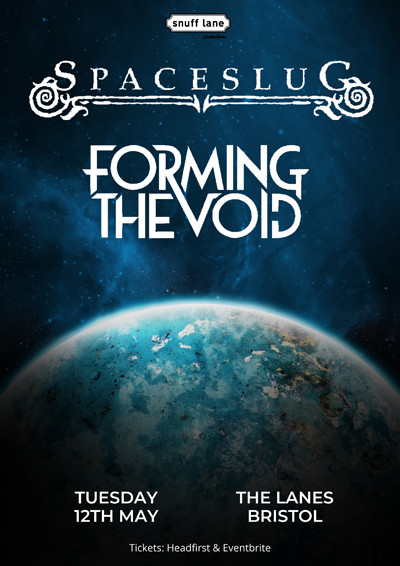