18+ event.
--
Afer a hiatus of over eight years Fuzzy Lights are making a welcome return. Burials is the follow-up to the critically acclaimed album Rule of Twelfths, and the fourth album from the Cambridge-based post-folk collective.

Their sound has been stripped back to its component parts, deconstructed and rebuilt under less obvious influences. There’s a bedrock of folk-rock - predecessors like Trees and Fairport Convention - but this is then built upon through multiple layers, from the stillness of Talk Talk to the orchestral chaos of
Godspeed You! Black Emperor. With Burials Fuzzy Lights have cultivated these sounds and influences into something new and fresh that distances the album from the rest of the folk-rock crowd.

The most striking element of these songs is how in>mate they are. Lyricist Rachel Watkins has revealed a lot about herself in these seven songs, which have been written from a very personal perspective. Raw experiences have been distilled into each piece, her translucent vocals o"en betraying the content of the songs themselves. The album is bookended with the most personal of these. Opener ‘The Maidens Call’ reveals her loss from suffering a miscarriage, whilst album closer, ‘The Gathering Storm’ frames the rallying cry of women’s rights around how individuals must work together now, and in future genera>ons, to destroy prejudice. There is also engagement with humanity’s immediate surroundings and the environment. ‘Under The Waves’ deals with devastation of coral reefs, ocean resources and our natural world, and ‘The Graveyard Song’ imagines the perception of >me from the juxtaposed views of a yew tree and a young woman.

As scenarios, paths, and outcomes shift around us, Burials’ amalgam of glowering, intense instrumentation, timeless, weightless melody, and exactingly revealing lyricism carves a very particular path through the world. This is music that tears us away from the everyday not just as a form of escapism, but as a means of self-reflection on hardship and the strategies we develop to overcome it. It is the band’s rawest yet most accomplished statement to date. 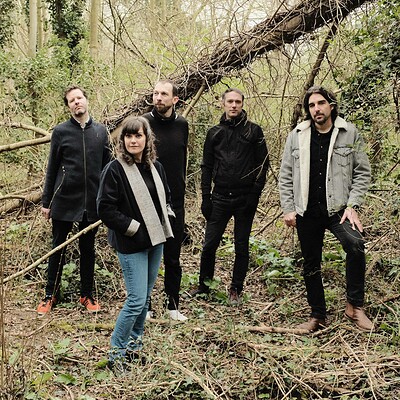