SYNTHETICA Presents:
▔▔▔▔▔▔▔▔▔▔▔▔▔▔▔▔▔▔
THE UNDERDOG: ULTIMATE CHALLENGE
The Southwest’s largest battle of the bands returns for the first time since 2017 with a brand-new format – The Ultimate Challenge! Our final four bands have been competing in a series of weekly challenges and events, all leading towards the Grand Final in January '22 - the Underdog’s 50th show!

With £1,000 in cash up for grabs who will be crowned the 2021 champion? Follow the competition by using the hashtag #UnderdogBristol.

The Underdog's 50th Show:
▔▔▔▔▔▔▔▔▔▔▔▔▔▔▔▔▔▔
First launched in 2015 as a response to the larger national competitions, the Underdog quickly established itself on the Bristol scene. Six years, and 49 shows later The Underdog makes it's Thekla debut - the first Underdog event to be hosted on a boat!
The Grand Final will be packed with seven local bands showing what Bristol music has to offer. Our final four bands will be competing at their very last challenge - winning over the judges and audience members at Thekla. Joining them on stage will be guest headliners Liquid State, winners of the last Underdog competition back in 2017, plus warm-up performances from Eleusis (One Night Only winner) and Wildcat Boozy (MicroDog winner).

VIP ticket holders get 5X votes to cast, plus exclusive use of the upstairs VIP bar - no queues to get drinks! There are only a limited amount of VIP tickets available so grab one quick!

The FINAL FOUR:
▔▔▔▔▔▔▔▔▔▔▔▔▔▔▔▔▔▔
Please Note: the running order of bands will be decided on the night of the show - come down early and support all the bands!

✪ BEARPIT
Metalcore · fb.com/BearpitUK
“Bearpit are a metalcore outfit from the UK. Rising again with the release of the single 'From the Ashes' in 2020, the band have been writing new material for an upcoming EP“
FOR FANS OF: Parkway Drive / As I Lay Dying / Caliban
LISTEN: https://spoti.fi/3kNkpc6
youtu.be/Qh_toDmOmzQ

✪ BLACKLIST
ALT ROCK · fb.com/BlacklistUKBand
“Blacklist are a three-piece alt-rock band from Bristol formed in 2017 with influences from electronic and industrial genres. Blacklist produces music with dynamic bass lines and catchy hooks with imaginative and emotive lyrics that immediately strike a chord with listeners.“
FOR FANS OF: Royal Blood / Muse / Queens of the Stone Age
LISTEN: https://spoti.fi/2ZuQMUQ
youtu.be/EslxklC_qIU

✪ HELL-IOS
ALT ROCK · fb.com/HelliosBandUK
“Hell-ios are a 2-piece band from Bristol who debuted at Glastonbury festival 2019, prior to this they spent time writing and recording material that they felt was something different, blending genres from pop, metal, punk & even some hip-hop elements.“
FOR FANS OF: Frank Carter & The Rattlesnakes / Death From Above 1979 / Boston Manor
LISTEN: https://spoti.fi/3zUDwFO
youtu.be/v-30Pg7iyFY

✪ LAND CAPTAINS
Riotous Groove-Rock · fb.com/LandCaptainsBand
“Bristol-based Land Captains have been rapidly building a reputation as a formidable live act, on a quest to fuse heavy riffs and funky beats; serious songwriting with a touch of bombast and a healthy dose of silliness. Devil horns or dancing shoes; swaying hips or headbanging blues? It's like a prog-punk cabaret in here.”
FOR FANS OF: Audioslave / Tool / Royal Blood
LISTEN: https://spoti.fi/3zOrJZi
youtu.be/DkcTyy4Xijo
GUEST HEADLINER:
▔▔▔▔▔▔▔▔▔▔▔▔▔▔▔▔▔▔
✪ LIQUID STATE
Alt Metal · fb.com/LiquidStateUK
"Born out of the gutters of Bristol, Liquid State are quickly making a name for themselves as a blood and guts band. Their ferocious live shows will smack you in the face with an attitude that would not only throw you to the floor but make you apologise for the trouble. Liquid State have been in the studio throughout 2020 and aim to release their second EP in Q2 of 2022 with touring support plans and festival slots to follow up."
FOR FANS OF: Spiritbox, Thornhill, Bring Me The Horizon
LISTEN: https://spoti.fi/3CWcBur
youtu.be/DMndj8SWntE
The WARM-UPS:
▔▔▔▔▔▔▔▔▔▔▔▔▔▔▔▔▔▔
✪ WILDCAT BOOZY
***MICRODOG 2021 Winners***
Post Punk · fb.com/WildcatBoozy
FOR FANS OF: Idles, Turnstile, Lady Bird
LISTEN: https://soundcloud.app.goo.gl/JH7wa 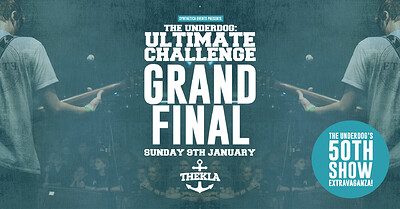