Originating from Bristol, JoBoxers stormed the UK charts in the ‘80s. Their single ‘Boxerbeat’ reached No.3 while the next hit, ‘Just Got Lucky’ reached No.6 UK, Top 40 US and featured in The 40 Year Old Virgin and Just My Luck movies. Boxer Frank Bruno appeared in the promo to their next hit ‘Johnny Friendly’ while their album Like Gangbusters reached the UK Top 20. The JoBoxers have toured extensively in the UK, US and Australasia. Other singles are ‘Jealous Love’, ‘She’s Got Sex’, covered by Sam Fox on her double-platinum selling album, and ‘Is This Really The First Time’ which features on Capital Radio DJ Gary Crowley’s Lost 80s album. JoBoxers feature all original members: Dig Wayne, Chris Bostock, Rob Marche, Sean McLusky and DC Collard who have all made their mark in music and performing arts in the groups: The The, Dave Stewart, Style Council, Subway Sect, Shakespears Sister, Lisa Stansfield, Matt bianco, Dreadzone, Spear of Destiny, Dreadzone etc The JoBoxers ‘very best of’ album Essential Boxerbeat will be released 24th June 2022 to coincide with a summer tour.
Support
Erotic Secrets Of Pompeii
Erotic Secrets of Pompeii play weird, angular music transmitted direct from the heart of the transgressive zone between art rock and post-punk, populated by grotesque characters and surreal imagery. Formed in Bristol in mid-2018, they released their debut album ‘Witness in the House of Pox’ shortly thereafter through Deaf Endling Records. Following a significant line-up change in 2020, they dropped a slew of sinister singles throughout the year, continuing across 2021.
Plus
Martyrials
Ruthlessly creative and creatively ruthless, the Martyrials [marr-tear-eels] produce an undeniably explosive blend of Dadaist, All killer, no filler synthesized Punk Rock and Roll! 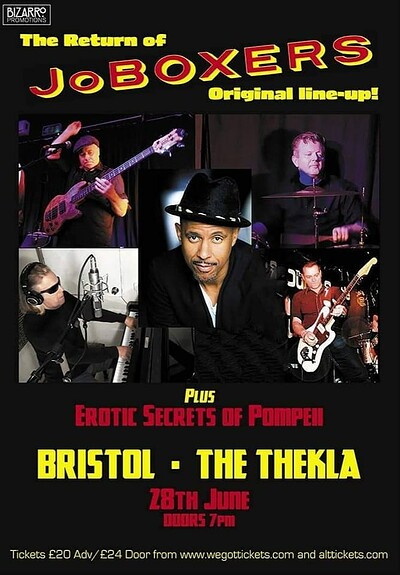