Outrageously addictive, Hum Fuzz are the band that will become your favourite earworm. The indie band flirts with an infusion of reggae and latin sounds creating soulful upbeat tunes that aim for the audiences’ hearts. The four boys originally from Bath have managed to maintain a friendship from their younger years and have committed to developing their passion for music. Their lyrical brilliance compliments strong bass lines and twisted guitar riffs all whilst maintaining a strong rhythm and beat. These boys will surely become one of your most cherished listens of 2019.

Catching Mangoes are a four-piece Rock band, based in Forest Row, Sussex. After meeting at school, they started playing at local events and festivals before starting on the London circuit. The three founding members George, Max and Dan then migrated to Brighton where they continued their musical journey - playing regularly and recording at Brighton Electric Studios, where they recorded their debut album "Kevin's Town" last year. While finding a new style and exploring new ideas with their debut album, they have recently been joined by Alex on Guitar and have hit the post-lockdown gig scene again with a bang. Support has come in the forms of BBC Sussex and Surrey, Reyt Good Magazine, Clash Magazine and they have played at sold out headline shows at Hop Yard in Forest Row and The Hope and Ruin in Brighton. 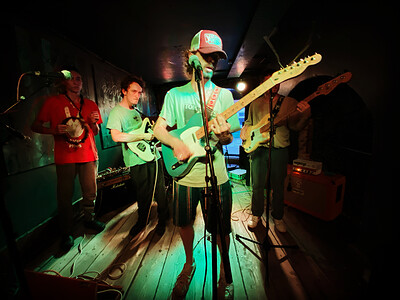