One bass, one drum... with a lot of delays, reverbs and other loops, the duet frees itself from its grooves stubbornly krautrock to weave sometimes dark atmospheres, often spacey, always psychedelic.

Black Asteroids (often referred to as BLAST) are a heavy instrumental duo based out of Birmingham, England. Featuring bassist Simon Donovan and Chris Allen on drums, BLAST initially began writing in 2011 in an attempt to push their own creative boundaries and experiment with a sound that focussed on the themes of space and the planets in our solar system. After a self imposed hiatus while working on other musical outlets, Black Asteroids returned to the forefront and in doing so made their live debut in August 2015.

Black Asteroids have released two EP’s, ‘Black Asteroids’ and ‘Black Asteroids II’, along with stand alone single ‘Saturn’ and have performed regularly around the United Kingdom in the years since. BLAST are currently working on their third release, which is due in late 2019.

Not to be confused with the independent progressive rock band from Finland, the UK Evil Owl are hard, retro and grubby. On their self-titled EP from 2018, this Bristolian trio take the garage rock base of Brockley Forest and load it with the kind of distortion and arty noise that fuelled the Sonic Youth classics ‘Sister’ and ‘Evol’ and throw in a few influences from Mudhoney and Tad for good measure. The result is a genuine blast of guitar driven anger – four songs with a retro heart but also loaded with a timeless, fuzzy appeal. 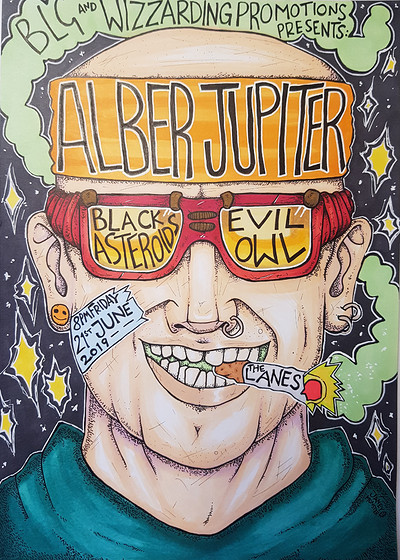