A fundraiser for Bristol musicians who lost instruments and other gear in a huge fire just before Christmas, this show will feature live sets from some of the bands involved.

There will also be a special DJ set from Bristol scene heavyweights Beak> and Corrs covers band formed for the night by staff at The Louisiana.

BEAK> DJ SET
https://beak.bandcamp.com/
Rare extended DJ set from the mighty Bristol out-rockers. The trio's music touches on psych, kraut, hip-hop and film soundtracks so expect this to go straight in at the deep end.

SCHNAUSER
https://schnauser.bandcamp.com/
Sunny psych/prog/pop/rock with an undercurrent of corrosive evil.
"What a wonderful technicolor nightmare this is. Nothing is missed under their cracked magnifier, and it's all brilliantly hummably horrific" - Prog Rock Magazine
"Schnauser are like that guy you work with who seems nice but is secretly building a shrine made of children’s fingernails in his house." - The Joy Collective

The (en)CORRS
Corrs cover band by the staff of The Louisiana. One-off performance. World exclusive!

In the early hours of Saturday 15th December 2018, the rehearsal space used by several different Bristol based bands and musicians caught fire. Thankfully nobody was hurt, but the bands have suffered big losses. Guitars, keyboards, amplifiers, pedalboards, drum hardware and accessories are gone. The loss is devastating for many of us, not just on a financial level, but on a personal and creative one as well.

Donations can be made at https://www.gofundme.com/help-replace-our-musical-instruments 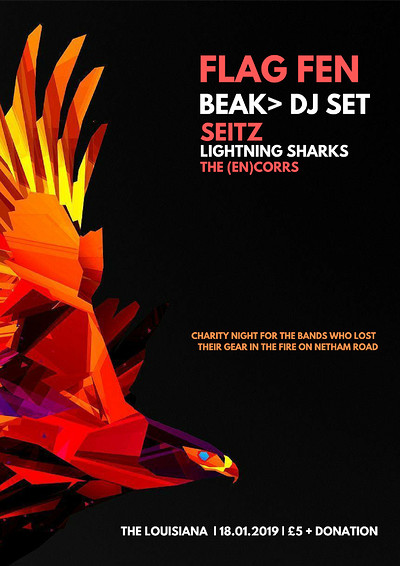