— The Mothers Ruin
Welcome to a night of progressive heavy-rock, with an eclectic style of metal inspired by early sci-fi and horror.
time:19:00
price: Prices Below Tickets Below

It's unfortunate news that we're to announce that due to the current effects and concerns of COVID-19; Howling Giant has taken the decision to postpone their EU/UK tour.

The event will not be going ahead and will now be postponed.

"As many of you have already heard, we are having to cancel our appearance at Ripple Fest Cologne due to the travel restrictions and quarantines. Many of you did not know that there were more European tour dates planned around this event that we will also have to postpone."

Based on the platform you purchased your ticket from will determine how refunds have/will be issued.

Customer will be refunded accordingly:

Headfirst
"Refunds have automatically been applied for all ticket holders.
It takes 10 working days for refunds to return to customers bank accounts."

"...their songs powered by a winning combination of redwood-thick riffs, ecclesiastic vocals, punchy drums and gospel keyboards, that reminds one of a blacklight poster involving third eye." - Kerrang!

Support from soaring, psychedelic, groove-rockers SERGEANT THUNDERHOOF, with more acts to be announced.

Howling Giant formed sometime in 2014 and not long after formation, would compose material for an EP. This eponymous effort would be released on 15 January 2015, followed by the band's earliest known show on 13 March. From that point the band would perform more frequent shows, including a string of mini-tours that July and August.

In 2016 the band would record a follow-up EP at Converse Rubber Tracks Studios in Boston, leading to the release of Black Hole Space Wizard Part 1 on 12 August 2016. The band would record a follow-up in Nashville, Black Hole Space Wizard Part 2 released on 25 August 2017. At this point the band began more frequent touring through the fall of 2017 going into 2018, which would lead to three US tours. This would include appearances at Firebreather Fest, Psycho Las Vegas, Doom Daze of Summer and Descendants of Crom.

On 2 August 2019 it would be revealed that Howling Giant had signed to Blues Funeral Recordings and unveiled details on their debut studio album entitled The Space Between Worlds. Described as an album with an "overarching concept exploring the idea that when we dream, we are in fact creating worlds that are just as tangible and legitimate as the waking world we live in.", The Space Between Worlds is set for release on 27 September 2019, with several shows surrounding the album's release.

Sergeant Thunderhoof formed in late 2013 from the ashes of many previous bands (Indica, Birds of Ares, Died Smiling, Sharp End First, Ratz Ass). The first EP (Zigurat) came out in early 2014 and explored the lyrical themes of alternative realities and histories. This fantastical basis has gone on to forge the overall theme of the band’s music throughout their work.

The first full length album (Ride of the Hoof) was released in November 2015 , followed by a live release (Live on Earth) in 2016 which was recorded in their home town of Bath in Somerset (UK).

2018 saw the release of their second full length (Terra Solus) and later in the year they appeared on ‘The Wall Redux’ record curated by Magnetic Eye Records, alongside the likes of The Melvins, ASG and Sasquatch.

Sergeant Thunderhoof remain defiantly unsigned and handle all their merch, bookings, manufacturing, design and fulfilment in-house. All their music is available for free or ‘pay what you want’ via their Bandcamp page.

More bands to be announced. 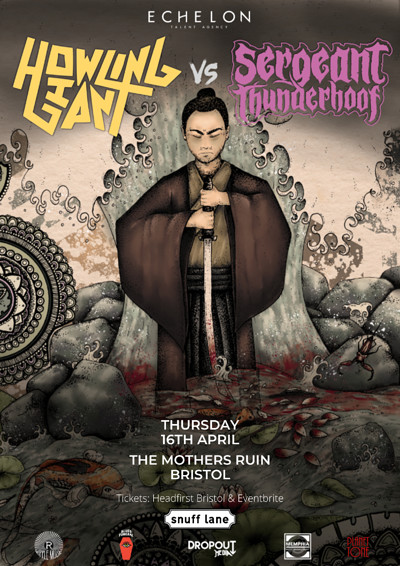